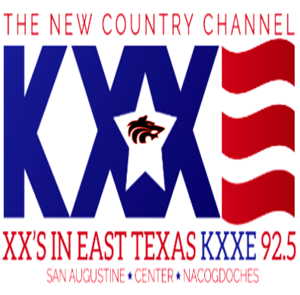 San Augustine ISD has once again given Center Broadcasting Company the authority to be the radio voice of all San Augustine Wolves’ Football for the 2019 season. Games will air on 92.5 KXXE-FM in San Augustine, and also be streamed on the company’s website, cbc-radio.com, or the Tune In Radio app, just search “KXXE”. Click the headline to read more!
The season will kick-off at 7:00 p.m., Friday, Aug. 30 when the Wolfpack hosts Big Sandy at Wolf Stadium.  Tracy Broadway will handle the play-by-play duties again for the upcoming season.  “We’re thrilled to be able to broadcast Wolves Football, both home and away again this season,” said Center Broadcasting Administrator Lori Alvis. “We appreciate the San Augustine ISD Administration, School Board and coaching staff for allowing the radio station the right to carry all games.”
Center Broadcasting was on-hand to carry all 15 games in 2018, thru the state semi-final round. Center Broadcasting’s game-day coverage begins 30-minutes prior to kick-off with The Coach Marty Murr Show, hosted by Don Wall. The segment will be a re-broadcast of Tuesday night’s live Don Wall’s Coaches Show at 9 p.m. on KQBB-FM 100.5, streaming at cbc-radio.com, or the Tune In Radio app, search “KQBB”. Show begins, Aug. 27.
Mrs. Alvis added if any businesses would like to be a sponsor of the broadcast, to please contact Center Broadcasting, 936-598-3304.
Published August 16, 2019 Print